The Try Series: Let's Do Stream of Consciousness Journaling

Have you ever come to a point where sitting in front of your journal feels like a chore? Instead of being an activity that can help you focus on your daily tasks, it has become a task in itself instead. Understandably, it may seem like this from the get-go if you’re just starting out as a new journaler, but for rest who’ve been journaling for many years, even the best of us gets to this point sometimes.

But maybe we just have to switch things around. Maybe your current journaling method is no longer working for you or you just need a break, a fresh approach, on how to get your thoughts down on paper. If that’s the case, then we’ve got just the thing for our second Try Series! It’s called stream of consciousness journaling.

But first, let’s talk about what stream of consciousness writing actually is.

What is stream of consciousness writing

Before it was ever a popular journaling method, stream of consciousness writing was a literary device primarily used by writers—authors of fiction and nonfiction. The Literary Devices website defines it as “the continuous flow of thoughts of a person and recorded,, in literature as they occur.” If you’re an avid reader, it’s your typical character monologue: that flow of internal thoughts that reflect their actions and represents or defines them. As a literary device, it was a type of writing meant to be read by others.

As a method practiced by many journalers though, stream of consciousness writing has evolved quite a bit. It’s not far off from what it really is: the focus is still on getting thoughts written down. But here’s where the journaling counterpart diverges from the original: it’s become all about letting your thoughts, no matter what they are, flow from your mind and straight to a journal page. No judgment, no agenda, no goal or even hopes for publishing. The main point is just to write anything and everything.

People who haven’t tried it might ask: what’s the point of writing with no specific intention behind it? Isn’t journaling meant to help people with specific things?

The purpose of stream of consciousness journaling

Just like talking to a trusted friend, family member, or therapist is supposed to be freeing, stream of consciousness writing operates within the same vein. When we pen down anything and everything we have in mind, we liberate ourselves from the doubts, fears, and worries that plague us each day. Instead of hiding in important corners and spaces inside our heads where they can distract us when we least expect them to, often when it’s inconvenient, we’re able to let them go. As a result, we’re then able to go about our day and make the most of it. Whether it’s to rest and recover or be productive and creative, we can focus on what’s important or right in front of us.

But is it effective? As a journaling method that I haven’t done myself, the only way to find out was to do it as part of the Try Series! 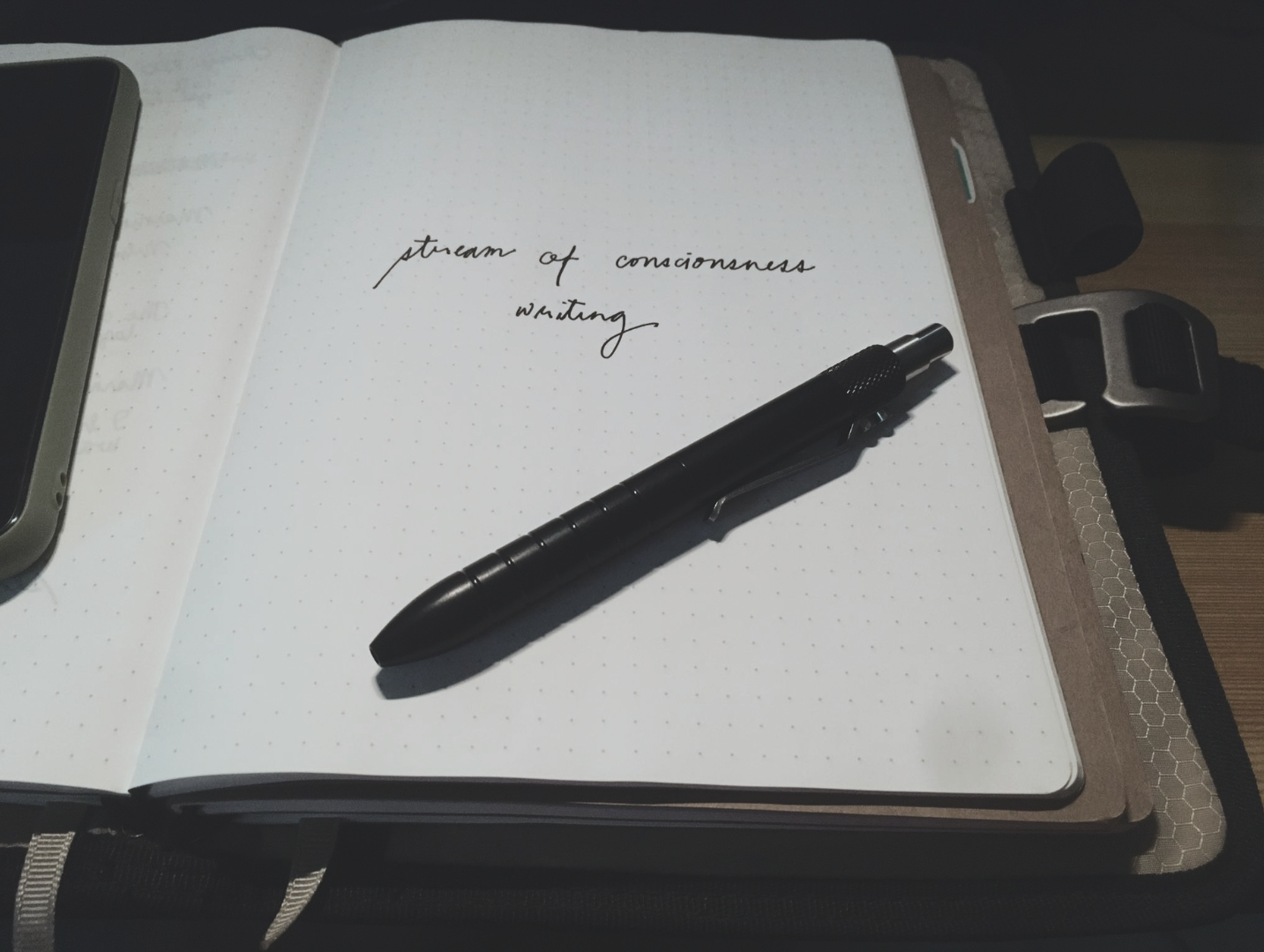 I prepared only three things for the second part of this series: My Field Journal (I specifically used my Dot Grid Refill), a pen, and my phone timer. Learning how I felt about time limits from my attempt of the Pomodoro Technique (read part one of the series here), I decided to set my timer to 30 minutes for a three-page limit. If I maximized the time, great! It’s extra long on purpose to make sure I didn’t feel like I was being interrupted should I take longer to complete three pages. I also decided to do it before bedtime for several reasons: I have five dogs that have very specific nighttime routines and it’s also when my mind is the “loudest”.

Of course, it goes without saying that my setup is going to be different from yours. Take the guidelines that come with any method and technique for what they are: just guidelines. You can always tweak and customize them in ways that will work best for you. In my case, I have a general idea of how long I usually stay in the flow, especially since I can write whatever I want. Consider your likes, dislikes, and preferences, and then go from there. 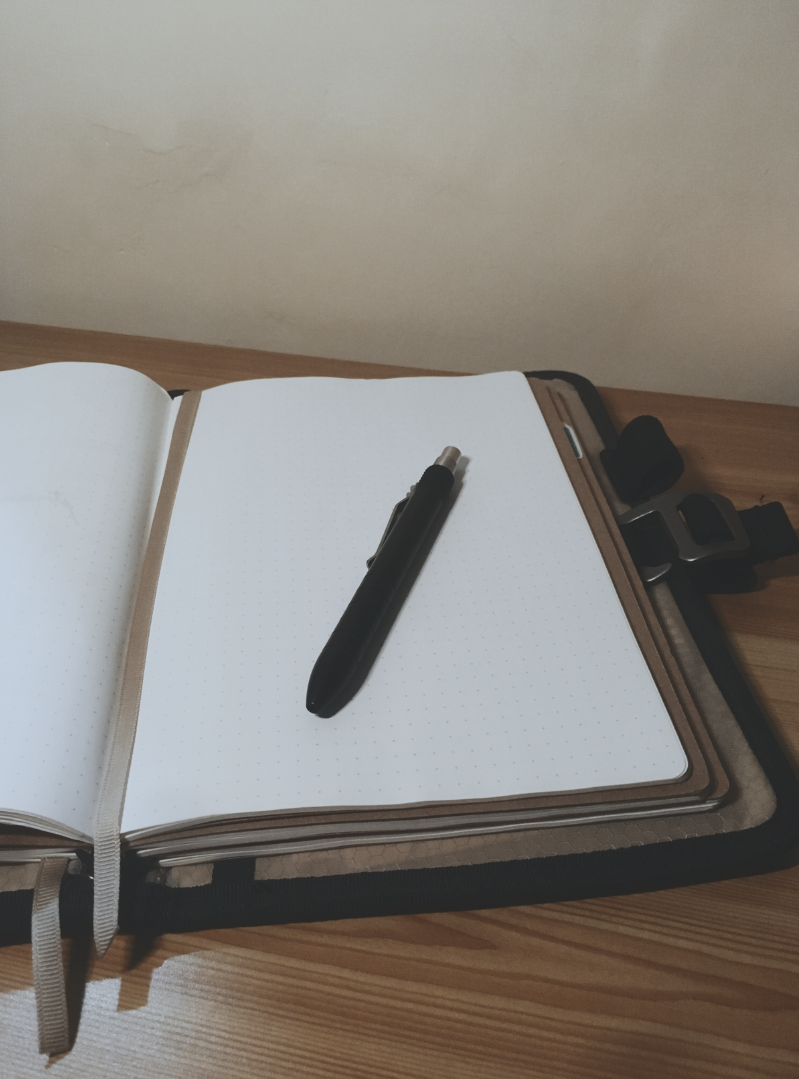 As someone who constantly suffers from writer’s block, it took me by surprise that I had a lot to say as soon as I started my timer. Three page limit? I was on a roll because I went way more than that at five! It became apparent why when I read the lengthy entry the next morning: I had many concerns, some of which I kept brushing off in the daytime while at work or doing chores. I still felt that way as I read on, but it was obvious these things bothered me: I kept repeating them. I would go off on a tangent but, consistently, found myself circling back and mentioning them again.

Given my current circumstances and a few major life changes that I went through recently—a sudden move and living on my own again for the first time in years—I hadn’t taken the time to sit down and have a conversation with myself. Instead, I barreled on with life as usual, refusing to acknowledge that I was struggling. In fact, based on what I wrote, I was ashamed to be struggling at all. As if it wasn’t a normal thing that happened to people facing a huge change in their lives and routines! No wonder I had writer’s block when it came to work-related writing.

There were things I needed to address.

I read my day one entry two more times before sitting down to write a normal but targeted journal entry this time. For this session, I had a specific goal: address the issues I’ve been ignoring and, if applicable, find solutions for them. Even if I didn’t necessarily solve a lot of the problems I finally had the courage to face head on, nor did I end up feeling a sense of accomplishment, I started my workday feeling a little more hopeful.

My next journaling session went by so fast, I didn’t even notice time passing. It certainly didn’t feel like 30 minutes when my phone’s alarm went off to signal the end of the session. While preparing for bed, I thought about a striking difference between my Pomodoro attempt and this one: with the Pomodoro Technique, my timer was a distraction. However, for stream of consciousness journaling, it was like a signal to calm down, slow down, and then wrap up my entry.

I’m not sure if it’s because of the circumstances; for the Pomodoro, I was trying to get things done and be more productive. In contrast, the only thing I needed to do for stream of consciousness journaling was write. There’s an obvious lack of pressure in the latter so I’m sure it’s a factor.

Strangely enough, I didn’t use up all three pages but a little less than two instead. Go figure. 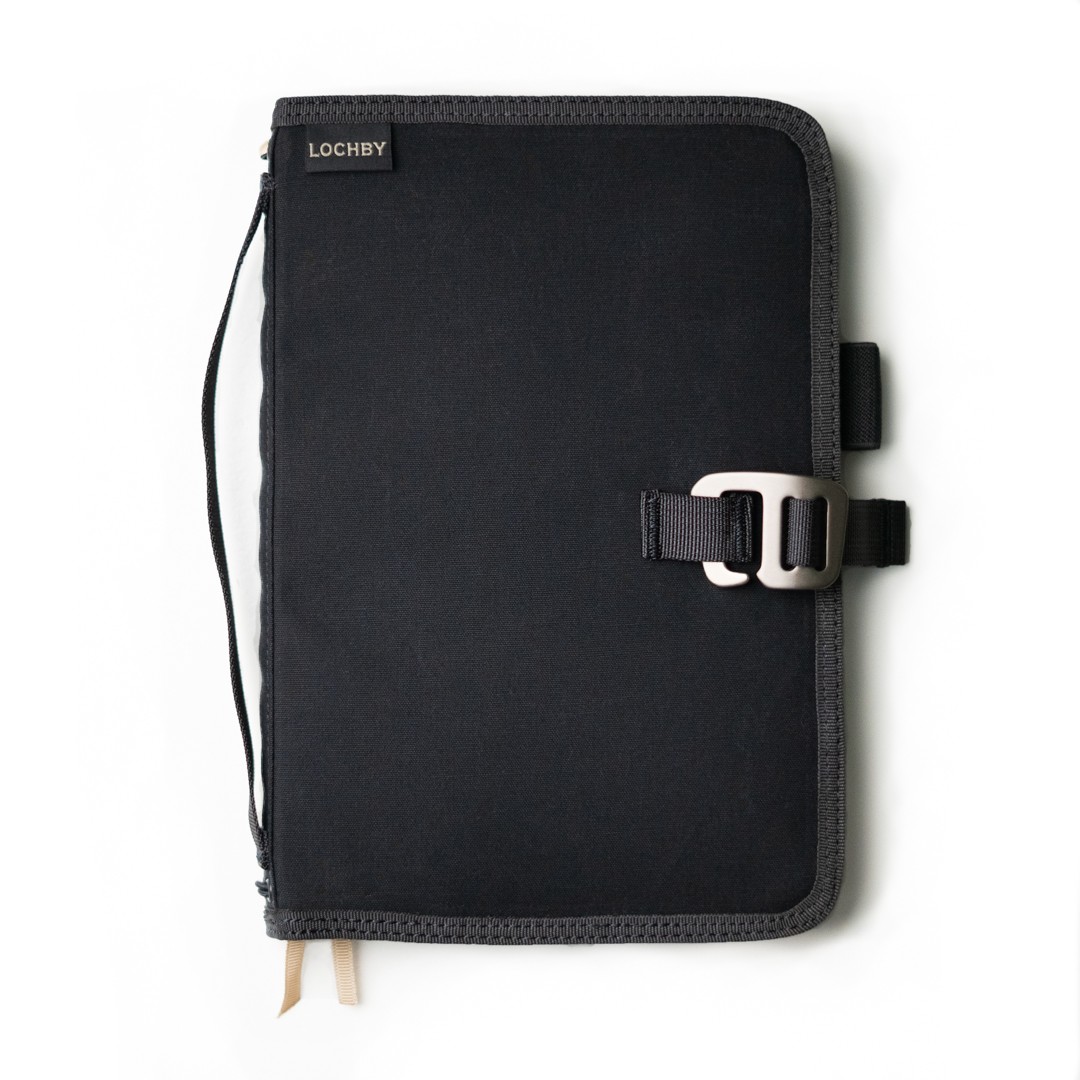 As opposed to the first two days, things slowed down for my third session. I’m thinking this is because I’d said almost everything I had to say and didn’t want to repeat myself. This bothered me, so after my time was up and with only a page and a half filled, I decided to do a Google search to know more about other people’s experiences with this method. This is what I found out:

Apparently, it’s ok to repeat yourself! Some people even write about how they have no idea what to write about in the first place. In my excitement of having so much to write the first couple of tries, I think I forgot one key thing about this practice: I can write anything. It doesn’t even have to be related to one another. Whether it makes sense or not, repeats itself over and over, is of no consequence.

For the fourth day, I allowed myself to really let go, encouraged by all the different experiences I’d read about the night before. I sat down for the session with no expectations and nothing specific in mind, and wrote the first thing I could think of.

It was something about one of my dogs, though I didn’t dwell because when I found my mind drifting towards something else, I didn’t resist but followed it instead. I may have stopped a few sentences awkwardly, some of them half formed and incomplete, but based on what I’ve read, that’s ok too.

I nearly filled up all three pages too! I felt accomplished even though I found the contents of my entry to be pretty random the next day. But isn’t that the beauty of stream of consciousness journaling? The topics can be about whatever!

By my fifth and last day, I felt like I was getting the hang of things. I think what can help is not to prepare for this type of journaling session. Often, before we sit down for most types of journaling methods, we already have something in mind that we want to dwell on and talk about. Unfortunately, this just defeats the purpose of stream of consciousness writing. Once again, when I reread my entry, not a lot of things didn't make sense. 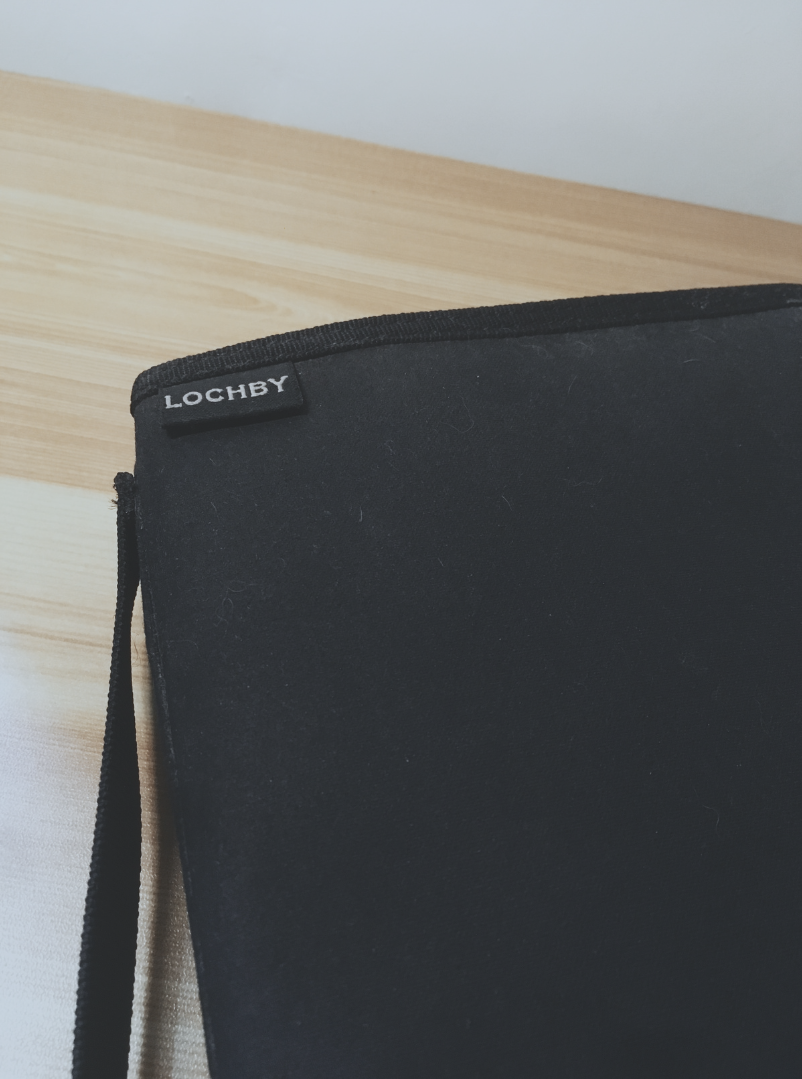 There was even one point where I stopped writing mid-sentence. I don’t remember what I was trying to say, but does it matter? Maybe I’ll figure it out during my next session.

Here are my takeaways during my five-day stream of consciousness journaling experience:

From what I’ve seen, people’s experiences with stream of consciousness writing are varied, but majority of them agree on one thing: that it does what it’s supposed to do and helps in clearing the mental clutter that we hold onto so dearly. Will I keep using this method? Definitely!

Have you tried stream of consciousness journaling yourself? What were the challenges that you faced? When was it most easy or most difficult? Do you do it daily, weekly, or monthly? Share your own experience below—I’d love to compare and discuss!